Look Out: Your Next Boss Might Be Much Younger Than You

Asim Zaheer, CMO of Hitachi Data Systems (HDS), didn’t waste any time. A millennial had recently joined the software company’s marketing unit and expected a promotion and bump in salary not long after.

Millennials—people born between the early 1980s and the early 2000s—make up about 25% of HDS’s marketing team. Zaheer, a Gen Xer, said he is eager to nurture such staffers for senior marketing roles. In fact, HDS offers a formal mentoring program for potential “high-success” millennials and is considering expanding the effort to include everyone in that demographic working at the company.

But this particular employee was playing into the stereotypes about millennials being self-entitled and infinitely snooty toward older generations. “I had to nip it in the bud,” said Zaheer, who fired the person. “I had to do something so it didn’t bite us in the behind later.”

Fortunately for HDS, voted No. 100 on Fortune’s inaugural list of the 100 Best Workplaces For Millennials (2015), that turned out to be a rare case. Zaheer said the overwhelmingly majority of millennials who work at HDS buck the stereotypes and get the drill.

“These are fairly sophisticated [marketing professionals] who have good social skills and emotional IQs,” he told CMO.com. “At the same time, they have high expectations, and we need to keep an eye on how to set those expectations.”

Unfiltered Opinions
Eighty-million strong, millennials now make up the largest share of the U.S. workforce, roughly 34%, outnumbering Gen Xers and Baby Boomers, who account for about 32% and 31%, respectively, according to the Bureau of Labor Statistics (BLS). 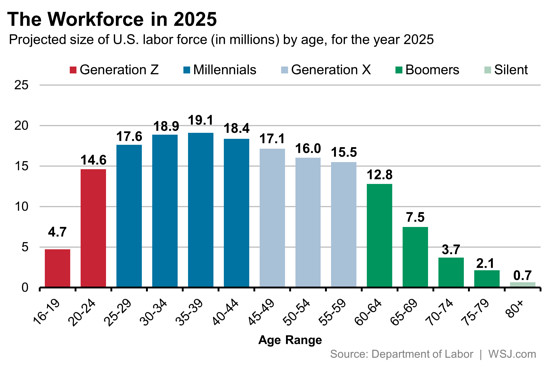 Millennials, of course, also are the first generation weaned on the Web, social media, and mobile communications, which presents both opportunities and challenges.

Zaheer said he regularly communicates via Twitter with millennials on his marketing team, which has proved invaluable to HDS’s marketing strategy. “It gives me a sense of the temperature among millennials, where the group is mentally, and what we’re doing as a marketing unit. I use all that as a lever to influence my team’s thinking,” Zaheer said. “I like to get unfiltered, unbiased opinions, whether it’s about what’s happening in pop culture, fashion, or music. That affects how millennials view the world and shapes how and what they expect to hear from companies.”

Michael Bennett, CMO of hotel management company White Lodging Services, also relies on millennials to provide him with business intelligence and where the pendulum is swinging with regard to consumer sentiment.

For example, two millennial employees who work in White Lodging’s marketing department covered this year’s SXSW conference in Austin, Texas, providing Bennett with regular reports about the goings-on at the annual festival. “They were our eyes and ears on the ground,” Bennett told CMO.com.

Austin is a key market for White Lodging, which manages 23 hotel properties in the area. In addition to engaging customers about how they liked staying in hotels in Austin managed by White Lodging, the marketing duo gathered intelligence about Airbnb, which is giving traditional hoteliers a run for their money.

“The feedback the millennials provided from SXSW has been crucial in our ability to analyze the financial impact Airbnb is having on our organization,” Bennett said.

Millennials make up more than half of the White Lodging’s 11-person marketing team, without much churn, according to Bennett, who pointed out that millennials in the company’s marketing department play an increasingly central role in the brand’s shift in messaging from business-focused to more lifestyle. “The more you engage them, the better results you get,” he said.

Cultivate, Don’t Coddle
As much as millennial marketers stand to learn from their older colleagues, the same applies the other way around.

“Older [marketing] execs are best served to reach out to more millennial-minded managers because the digital world is only going to grow in importance, and that’s what millennials know best,” said Albe Zakes, a communications consultant for TerraCycle, who is a millennial and has managed others in his generation. “At the same time, millennials have to learn from older execs how to dialogue and develop relationships, which comes from learning about management structure. You can’t develop [internal] relationships with a tweet.”

With many already running digital practices, millennials are fast-moving into senior marketing management ranks. That puts the onus on seasoned CMOs to cultivate these employees for promotion and provide guidance—but not coddle them.

For marketing managers eager to harness millennials’ digital skill sets—and keep the attrition rate among them down—the key is not to buy into the caricature. Rather, they should be approached as individuals who drive business, rather than a monolithic bloc of uncontrolled savants.

“The good news is that every generation challenges the conventional thinking of the group in front of it,” said Kathy Button Bell, VP/CMO at Emerson. “You have to provide patience and clarity” about how to develop their careers.

The biggest impact millennials have had on the brand’s marketing efforts, Button Bell added, is their penchant for ensuring the company’s messages are authentic.

“They have this idea that when you are creating corporate social media, how do you keep it alive and real, as opposed to just delivering a corporate response?” Button Bell told CMO.com. “That’s made us more cognizant of how to reach consumers and not to have a command-and-control [approach].”

Emerson’s ongoing advertising, marketing, and social media campaign, featuring YouTube sensation Hank Green, helps to illustrate the impact that millennials are having on Emerson’s marketing efforts, as well as its internal communications.

The “I Love STEM” campaign, which launched last year and was expanded in late April, is designed to educate and entertain people about science, technology, engineering, and math (STEM), for which Emerson has made a multimillion-dollar commitment.

Green, an older millennial and self-proclaimed “science nerd,” has a combined 10 million YouTube subscribers. By tapping into that audience, Emerson is broadening its brand’s appeal among millennials and science-minded folks.

“He gives us a doorway into millennials,” Button Bell said. Through the STEM campaign, “we can appeal to millennials and, for older people at Emerson, it makes you feel like you’re working for a progressive company. Who doesn’t want to be more hip?”

For CMOs looking to harness the millennial mindset to a positive effect, it’s best to leave generational schisms at the door.

“It’s not about the generation—it’s about the culture,” said Daniel Incandela, senior VP of global marketing at Return Path, voted No. 57 on Fortune’s list of 100 Best Places to Work. “The responsibility is on millennials to adapt to the style of your organization.”

Millennials’ reputation for being addicted to ephemeral messaging and unable to communicate in paragraphs isn’t borne out by the roughly 67% of millennials who comprise the brand’s marketing department, according to Incandela.

“We have a high percentage of millennials who communicate via email and Google Hangouts, which are two of the key platforms for how we communicate and collaborate internally,” Incandela told CMO.com. “Being a manager can have its difficulties, but it gets easier when you are direct and honest, and that’s what works well with millennials.”

“We have a varied group of personalities on our marketing team who have different communication styles,” she said. “As millennials, we’re categorized as having difficulty focusing on one thing at a time, but I think it’s more our ability to adapt from one style to another, and that’s where we have an advantage.”

Max Thorpe, a marketing manager at mCordis (and author of CMO.com’s “Millennial Max” blog), stressed that if CMOs want to harness millennials' skill sets in the workplace, they must ensure an “experiential” approach when they dole out marketing assignments.

“You can tell us what to do, but don’t tell us how to do it,” he said. “We’ll deliver the end product but may come up with an entirely new way of doing it using both digital and traditional marketing elements.”

Room to maneuver is key. “Structure is great, but too much of it and you lose us,” Thorpe added. “We need a degree of creativity and freedom and being able to try things and experiment. We need a lot of responsibility from the get-go and don’t want to fall into a routine where it’s the same thing day in and day out.”

Indeed, half the battle in grooming millennials for senior marketing roles and keeping their creative juices flowing is not to necessarily let them stay on one project for too long. Giving them a sense of ownership helps, too, along with esprit de corps.

“We had three or four [millennials] who were very passionate about helping nonprofits and wanted to try something new,” said Martha Hiefield, global chief talent officer at POSSIBLE. “I let them run with it, but I had checkpoints.”

The program’s benefits are twofold. “We’re giving back to the nonprofit community, but it’s also a way for [younger] individuals at the company to practice their presentation and managerial skills,” she told CMO.com. “It also gives them an opportunity to share their point of view on how we develop managerial skills.”

Hiefield stressed she doesn’t hire “millennials,” per se. “You have to take a step back and get to know them as people and what motivates them,” she said. “Great ideas can come from anywhere if you’re open and can listen.”

Artificial Intelligence Is Shaking Up The C-Suite